The Stray game was one of the most popular titles during this period. This game was able to attract the attention of many people and find many users. The main thing about Stray is that the main character of the game is a lovely cat. For this reason, it was well received. It is very interesting that you control a 4-legged character instead of a two-legged character. On the other hand, the cat of this game is also very well designed, which makes the experience of being a cat more enjoyable than ever.

Tramp is an adventure game developed by Blue Twelve. The publisher of this game is the Annapurna company and it has been released for the PlayStation 4 and 5 consoles along with the computer. Stray Game focuses a lot on story and environment. For this reason, these two items are very carefully designed in the game.

User comments about this game are very positive. The problem is that most people looked at this game very positively because of the main character being a cat. There’s no doubt that Tramp is a good title, but it’s definitely not one of the best games ever made. Stray has problems like other games, and for that reason, it cannot be said that it is the best game ever made.

The production company has made a lot of effort to design the main character of the game accurately and has done very well in this field. The game environment is also interestingly designed and the story of the game is also beautiful. Now the main point here is whether or not The Tramp can fully meet your expectations as a good story title.

In this text, I am going to review the tramp game. A title that is good in terms of gameplay despite a very positive view. So stay with me.

The story of the tramp game; Beautiful and consistent

We will start the review of the vagabond game with its positive points. The story of this game is very beautiful and well designed. Also, the harmony of the environment and the story has made you heavily involved in the tramp. The only main point of the game here is that the story is not what you would expect from a cat. However, one of the strengths of the vagabond is its story.

The general story of the stray game is about a small cat that is in the open environment. He and his family decide to move, and in the middle of the journey, the little cat is separated from his family. The cat enters a sewer and finds himself in a city. A city that is completely closed and there is not even sunlight in it. Now you have to try to get out of this dark city.

B-12 is one of the main factors of the game

B-12 is one of the main factors in both gameplay and story. His memories and dialogues give you the story. The world of the tramp game has its own language. For this reason, this language must be translated for you. So you need B-12 to have a conversation with anyone. B-12 memories are hidden everywhere in this world. You have to look around to find them, and the B-12 scans them.

In the beginning, B-12 doesn’t remember anything. By finding memories and advancing the main story of the game, this little robot will gradually get his memories. As you progress further you will realize that B-12 is no ordinary robot. This makes the story of the game even more interesting.

B-12 can even be considered a main character in the game Tramp. Where your cat is unable to speak or understand the world around him, this little robot will help him. That’s why B-12 plays more than a companion role for our little friend.

The dialogues of the tramp game will satisfy you

In a title like Vagrant, dialogue is extremely important. For this reason, manufacturing companies focus a lot on this story. The world of the tramp game consists of robots. This city has its own language, as we said, with the help of B-12, you will understand the world of this game more.

The dialogues in this game will give you the feeling that you are in the world of robots. However, these creatures have changed a lot and this makes the game more interesting. Because these robots have feelings and even have children! If the dialogues of the game were not good, you would not understand these issues. For this reason, the dialogue in this game gives the user a good experience.

The only problem is that sometimes these conversations become too much. For example, your conversation with B-12 may take several minutes when it doesn’t need to. This issue of excessive conversations has a great impact on the gameplay. Also, you don’t have a specific mission and you have to figure out what to do by talking to other people or B-12. Especially since completing each mission is heavily dependent on talking to people around that area.

The dependence of the gameplay on the dialogue makes the tramp a bit boring. The only problem here is that the dialogues between different characters in stressful situations cannot convey this feeling to you. Of course, inducing a sense of anxiety is not expected from a robot, but it still seems that the creators could have done better in these situations.

One of the main problems of the story is that it doesn’t make you feel that the main character is a cat. If you are familiar with the behavior of these creatures, you will understand that they do not care about most of the events. Basically, the stray game is designed as if the soul of a human is flowing in this cat. This section cannot be considered a negative point of the tramp game. Because the main idea of ​​the game brings this problem. However, it should be noted that you will not experience 100% of being a cat.

At the end of the story section, it should be said that the story of the vagabond game has one positive point, and that is its consistency. In such a way that you will never forget the story or the work you have to do. This issue is very important for a title that has a linear story like Tramp and this game easily copes with it.

The music and sound of the tramp game; Beautiful and catchy

The music of the tramp game is very interesting. Also, this game knows when to be quiet. That is why it will drown you. The variety of music is also very high in Vagabond. You will hear from modern and robotic songs to calm songs in this game. For this reason, it can be said that music is one of the positive points of Vagrant.

On the other hand, the sound of the game is also very good. The sound and animation are perfectly matched, and on the other hand, the cat’s voice is completely natural. You even have a separate button for meow, which the interesting thing is that people around you react to it!

The Tramp game is one of the creative titles of the last few years. Using an animal as the main character is not something we see very often in the world of video games. The stray cat game is very well made. This animal is very cute and having a separate button for meowing multiplies this issue.

The production company has made every effort to make the game more natural so that the sound and animation match. This is why your cat will make noises when you jump down from a great height. On the other hand, if you walk on the piano, there will be a dissonant sound. These little things made the voice acting one of the best parts of the tramp game.

The title of Tramp is not something I would say everyone should experience. However, you will not regret it. The game is short and tells a beautiful story. A story that may be the future of all humans. So, if you are interested in experiencing a different title, definitely put Tramp on your list. If you want to see a good apocalypse game, don’t forget Tramp. If you are a cat lover, don’t try any game except Stray. 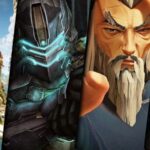 The best PlayStation 5 RPGs we can play right now

Challenge your mind with these brain games for iPhone and iPad